Magazines from the Past Wiki
Register
Don't have an account?
Sign In
Advertisement
in: Contains PC Reviews 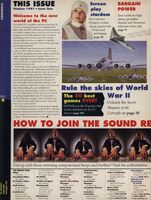 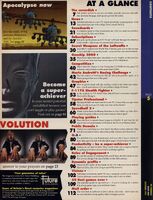 Sega's PC/Console Hybrid: Sega release the Teradrive in Japan. A PC with built in Megadrive - (13)

PC Format Bursts into Life: Introducing the essential guide to leisure on the PC - (14)

Showing Out: "World of Commodore" show at Earls Court in November - (15)

The chips are alive with the sound of music - and bangs, bleeps, whistles and whoops - as John Minson seeks a harmonious solution as to which of the many PC soundcards out there deserve your hard-earned notes.

Creating works of art on a PC is an exciting way of stretching the machine's capabilities and your creativity, so start to get arty as PC Format puts you in the picture.

Let us go now, you and I, to see the software you can buy without need for a sedative. Yes, you can put the loan application away as Jason Saunders tells of public domain software that costs not a lot.

Public domain guru Phil South names the top ten titles that will get your collection up and running in style and at a minimal outlay.

If juggling can give you the synapses of a super-achiever, then gaming really motivates the grey matter, argues John Minson.

Film-making techniques are bringing a taste of Hollywood to computer games as developers take on real actors to breathe extra realism into their wares. Paul Rigby goes on location with American developer Dynamix and takes a behind-the-scenes look at the PC path to the stars.

Features The Adventures of Willy Beamish, and Heart of China

There's a wealth of great games available for the PC and here is the PC Format guide to the cream of the crop. Be it strategy, combat or adventure, there's a game here for your tastes.

Secret Weapons of the Luftwaffe - PC

Attention to detail and historical accuracy add to its appeal and the huge variety of planes and missions makes Secret Weapons utterly absorbing. Definitely not a game to be kept secret.

It's very easy to bandy around phrases like 'a great reason to own a PC' and 'the best flight sim ever, only to have the accolade made redundant a month later when something better comes on to the market. For this reason I'll simply say that I have yet to play a better flight simulator and I doubt if I'll come across another of this calibre in the next year at least.

Suspect qualifying times and the dubious behaviour of competing cars detract from the game's overall appeal, but after progressing to the high-performance cars, gameplay is transformed. The trouble is, getting there is almost too much of a challenge.

But playing F-117A is a treat. It's thoroughly fascinating, easy to get to grips with and yet impossible to master overnight. While it isn't markedly different from most flight sim fare, it's a testimony to accomplished programming technique that'll take you and your machine to the limits.

I may sound as though I'm slating the game, but I'm not. Certain parts are less than brilliant, but on the whole Speedball 2 is a great game to play on the PC. Its flaws just detract from it a little.

Best advice if you wish to get the most from your investment in this game is to concentrate on the Builder screens in order to create your own worlds and beings. This is a genuinely fulfilling aspect of a game which is otherwise totally average in the extreme.

Community content is available under CC-BY-SA unless otherwise noted.
Advertisement